Restoring the original look of your historic house

Last time we did a survey of the Greek Revival houses in my town of Medway, Mass. There are some great examples of the style in town, ranging from humble to high style.  Now let's take a look at the potential pitfalls of altering the original siding and trim details.

It's pretty clear to me that the average home builder in the 18th and 19th centuries had a much better grasp of the basics of architectural styles than their modern day counterparts. Architectural styles had rules. Carpenters did not simply make things up as they went along. They used either pattern books or local examples to guide them as they built up cornices, columns, and other architectural elements. A quick look at some of Asher Benjamin's pattern books will reveal some of the rules used by the master carpenters to produce their millwork.

As a result these old places are still pleasing to the eye all these years later. The proportions are "right". On the new houses of today moldings of different styles are mixed and matched randomly. Windows are often out of scale with the facade; either too big or too small. You'd be hard pressed to find a carpenter who could tell you the difference between an architrave and a capital.

So let's look at what happens when ill-informed alterations are made to historic houses.  First we'll look at a fairly intact Greek Revival here in town. 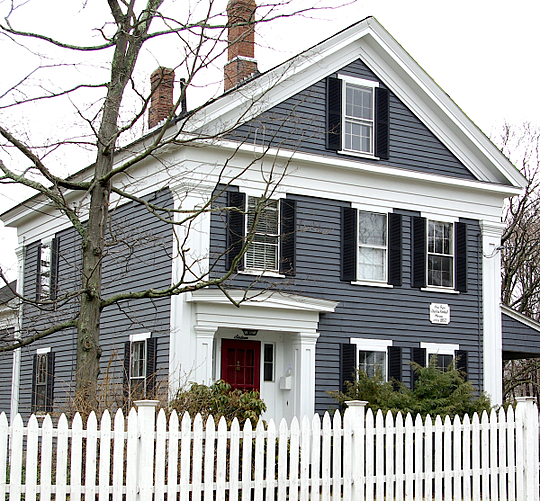 As we discussed in the last post, this house is based on the Greek temple form.  The triangular gable (also called the pediment) is supported by the wide, horizontal band of trim (the architrave)  which, in turn, is visually supported by the wide "columns" (which are represented by the wide cornerboards, called pilasters). The pilasters have capitals at the top, just as true columns do.

Visually it all makes sense. There is a logic to it.  The wide pilasters look as if they can carry the weight of the architrave and pediment above. It's simple yet quite elegant.

So let's look at what happens when this sense of order and proportion is disrupted (with apologies in advance if I offend any of the homeowners).

Our first test case is the house below. A quick look will reveal two changes.  First, the wide horizontal trim band (called the architrave, remember?) made up of several boards in the original has been replaced with a single board so that it is now much narrower.  It feels less substantial and out of proportion with the pediment above. The second floor window trim no longer touches the trim boards above so the composition feels less unified.

Even more troubling is the fact that the pilasters have been replaced with simple cornerboards. Gone is the detail of the recessed panels on the pilasters.  Gone are the capitals. And because the cornerboards are so narrow gone, too, is the sense of proportion.  These narrow cornerboards seem incapable of supporting the visual weight of the pediment above- they look like they may crumple at any time- so the whole effect is much less pleasing to the eye (and it doesn't help that the shutters have been removed either). Still a nice looking house, but not as cohesive as our original example.

Our next example has been altered even more. First, the triangular pediment looks less substantial because the wide trim boards that once followed the slope of the roof were removed when the clapboards were replaced with shingles (take a look at the two houses above to see what I mean). Second, there are absolutely no pilasters or cornerboards.  These, too, they were removed when the siding was replaced.  There is nothing to visually support the pediment and roof. Next, of course, is the siding. I've seen few, if any, Greek Revivals that look better with shingles than the original clapboards. With no cornerboards, no shutters, and shingles instead of clapboards, this house looks a little naked compared to our original example. 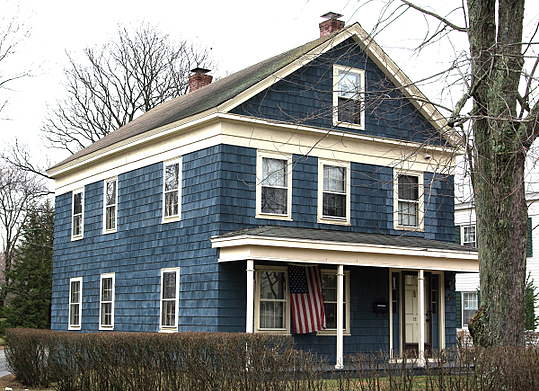 Our next case displays the unfortunate result when a nice historic house is covered with vinyl siding and aluminum trim. The installers were intent on covering everything in sight. Look at how bad the horizontal architrave looks when treated with siding. It loses its decorative function, which is to visually support the roof. Fortunately, it looks like most of the trim is probably still under the vinyl and metal wrapping so this house could be more easily restored to its former glory than some of the other examples. 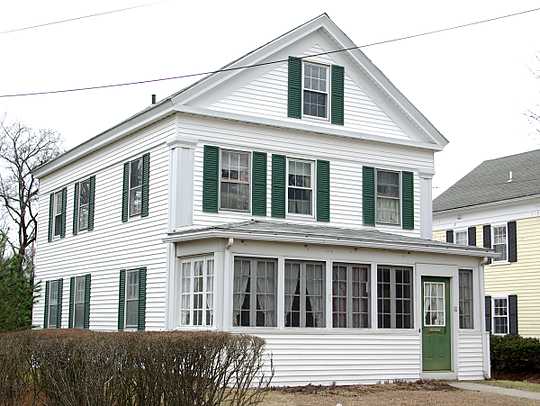 Our final example has been maintained and preserved to a larger extent than the three previous examples. In fact, apart from the porch addition, it would rival our original example. The porch (not original, but not bad) obscures the front door surround and also visually interrupts the pilasters, so that they no longer appear (at least from the street) to reach the foundation. All in all, though, this is a well preserved example. 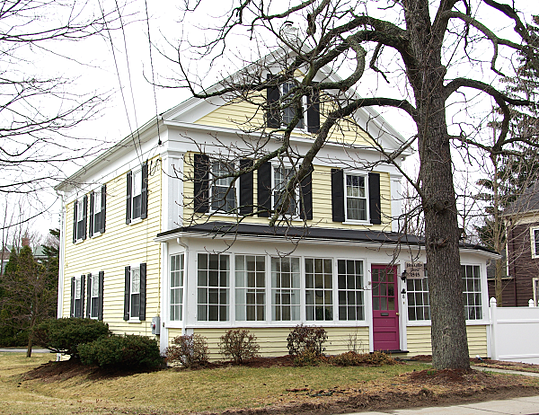 This row of Greek Revivals illustrates why it's important to consider the intentions of the original builder and/or designer before undertaking renovations of historic house. If your house has been altered by a previous owner, don't despair. Study the houses in your neighborhood. Check the historic society for old photos of your house (we found a great 19th century photo of our place). There are a lot of great resources to help you figure out what your house may have looked like.

Not sure where to turn? Give us a call. We've been restoring and renovating historic houses in and around Massachusetts for over 20 years. We'd love to discuss your house.