As a renovation and restoration contractor here in Massachusetts, I have built a lot of additions on to historic houses. Contrary to the philosophy of some preservationists, who feel that new additions should read as new additions and not pretend to be old, my philosophy is that additions are much more pleasing when they complement the architectural style of the original house.

In previous posts we discussed some of the concepts involved with designing appropriate looking additions for historic houses. Additions should not overwhelm or compete with the original structure, not should they looked tacked on. So in those posts we talked about ensuring that the roof placement of additions is correct and that the trim on the addition is sympathetic to that on the original structure.

In this post we'll look at the issue of massing.  How large is the addition compared to the existing house?  If it's as large or larger, it will best when broken down into smaller components, rather than one large mass.  In the photo below, you see almost 5000 square feet of new space added to an 18th century house of about 2200 square feet. But because the addition was designed as a series of smaller shapes, it is less overwhelming to the original. Everything to the left of the chimney is new. 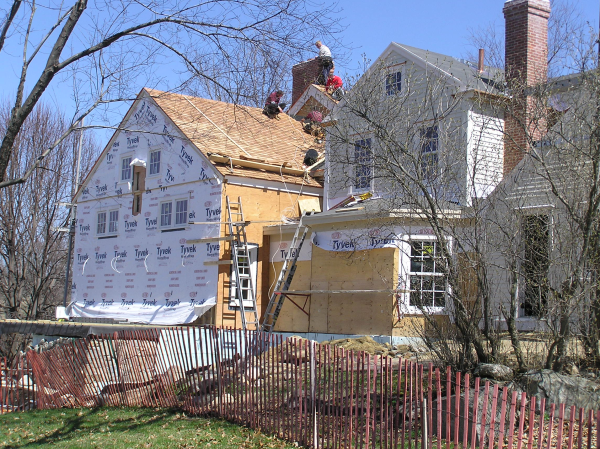 In the photo below, everything between the main house to the left and the attached barn to the right is new space. Originally there was a one story ell connecting the two. Notice how the roof line of the addition is broken and brought down much lower in the right-hand part of the addition, as if these two sections were built at different points in time.  This decreases the visual mass of the addition and helps to blend the new space with the old. Imagine if the second floor roofline were carried all the way across to the barn- the addition would have overwhelmed the original house. (To see the completed house, check it out in our portfolio). 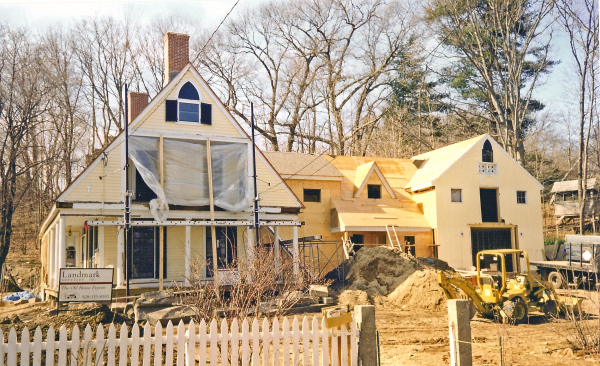 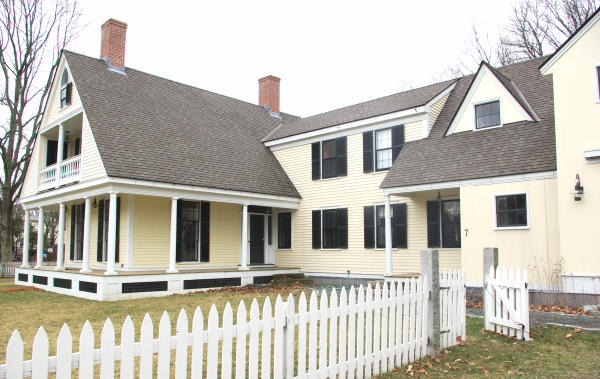 Conversely, tiny little additions look odd when tacked on to larger houses, as illustrated in the photo below. Of course, it doesn't help that the addition has almost no architectural detail!

There must be a more gradual transition in size. This is why the traditional Big House-Little House-Back House-Barn structure of old New England farmhouses is so appealing to the eye.  These houses look organic and natural. There is a clear visual hierarchy of importance among the sections of the house.

Our advice? Work with an architect. Most builders, even those that bill themselves as design-build firms, have not mastered the subtleties of designing additions. And I say this as a contractor. Are there exceptions? Of course, but I believe that your odds of getting the results you want are higher when you work with an architect who has a track record of designing additions.

Also, it's really helpful to use models to help you visualize your proposed addition.  Either physical models or virtual models, like the one below, obtained in most CAD programs can help you understand how the new addition relates to the existing house. If you're working with an architect, ask them to generate some 3D perspective drawings of the project or- even better- see if their software allows for 3D "flyovers". If you're not working with an architect yet, and you're in the Greater Boston area, let us know. We would be happy to recommend some architects that we think do a nice job designing additions on old houses.