The selection of exterior paint colors for historic houses is, admittedly, a very subjective topic. Color schemes that please some people might give their neighbors nightmares. As subjective and personal issue as this topic is, however, it is clear to me that some color schemes enhance the look of an old house while others can make a house look either too bland or clownishly over the top.

Some basic knowledge is helpful. Until the Industrial Revolution, most paints were mixed in small batches using naturally found earth pigments. Paint colors, therefore, tended to reflect these pigments: red oxide, yellow ocher, lamp black, red and white lead, etc. Common exterior colors were reds, yellows, and greens.  I think that the colors from Old Village Paints represent 18th and 19th century paint colors fairly well. White was most often reserved as a trim color in the 18th century. Around 1820 or so it became a more popular body color. Greek Revivals, in particular, were often painted white - or had white trim and a body color such as straw yellow or a gray or tan meant to suggest stone. It should be noted, however, that the "white" that was used back then was more of an off white, not the super whites available these days.

Even after paints started being mass produced in the second half of the 19th century,  exterior colors still favored earth tones such as ochres, various shades of green, browns, and deep reds. Roger Moss' book on historic colors captures this well. New colors were being introduced during this period, too, so the options were much greater

There are two common mistakes with exterior paint colors that I see. The first is to paint a house that would have had many colors just one color, usually white. Take a look at the two houses below (which sit side by side in a Boston suburb). The one painted all white really obscures the wonderful detail that was so important in this period. The multi-color scheme expresses the architectural detail. In point of fact, however, neither scheme is historically accurate. These houses would likely have had dark trim colors against medium body colors. Light (or white) trim colors were not commonly used until the 20th century. 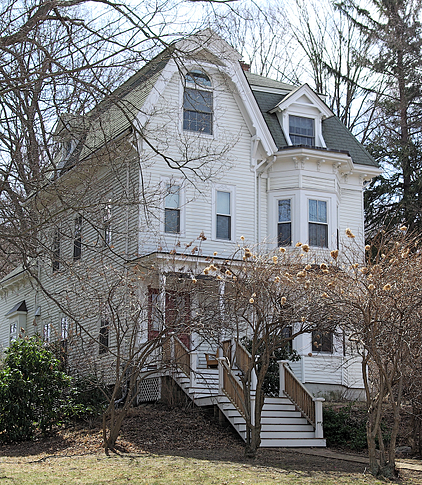 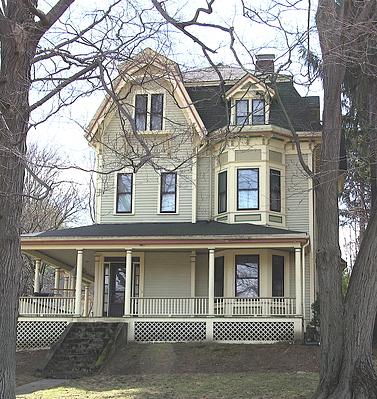 Here's another case, this time with side by side Eastlake style houses in the town of Hudson, MA probably dating to the 1870s.. During this period color would have been used to pick out some of the architectural detail. Again you notice how the version painted in white- while a beautiful house- fails to do justice to the great carpentry. 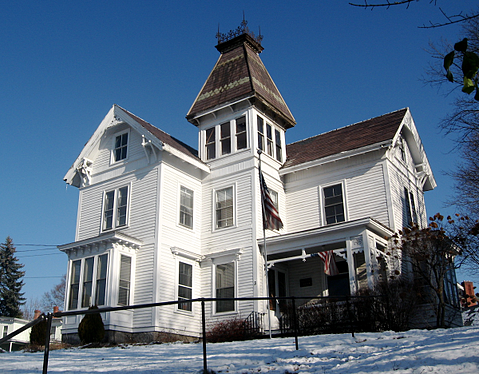 The other common mistake is to make any late 19th century house look like a  "Painted Lady". The books by that name are responsible for garish bright paint schemes from sea to shining sea. While purples, pinks, and aquas may please some people, in my opinion they look out of place, especially here in New England. Yes, some vibrant colors were used in the late 19th century, but earth tones still were the predominant palette.

Instead of this paint scheme .... 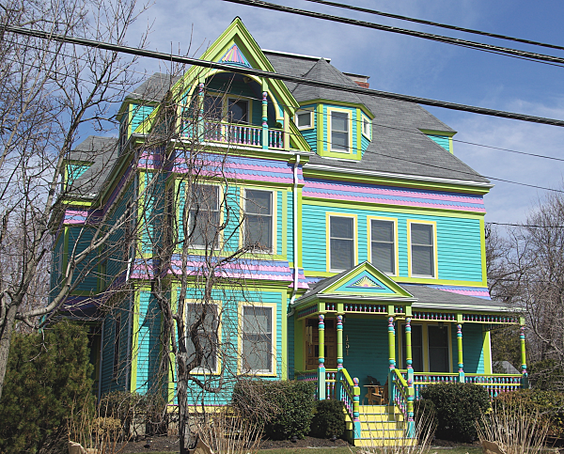 ....for my money, I'd take either of these schemes any day: 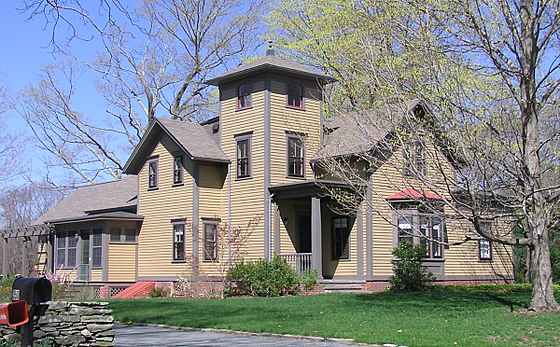 Or this beautiful palette ...

Sometimes historic paint colors were used to suggest other materials, in particular to suggest that a wooden house was actually built of stone. I once worked on an 18th century house in western Massachusetts that had rusticated board siding (this is wood planks made to resemble blocks of stone by carving fake mortar joints into the wood). They used a reddish brown paint designed to look like the local brownstone and they actually added some brownstone dust into the paint. For the "joints" they used a white paint. George Washington used this same technique on Mount Vernon.

Of course the good thing about paint schemes is that- unlike getting rid of a house's original windows- they are not permanent. An inappropriate scheme can be painted over by a future owner.

There are two main options when it comes to selecting historic paint schemes:

1. Use the original colors.  This requires an experienced paint consultant who can analyze the original colors by looking at paint samples taken from the house under a microscope. This is not inexpensive, but for some owners, the result justifies the expense. Paint analysis can also be used to determine the colors used in later renovations. For example, if an 18th century house was renovated in the Italianate period, an experienced consultant can sometimes determine what the Italianate colors were.

Some paint companies and websites offer online tools that allow you to upload a photo of your house and "try on" different colors on a computer monitor.

One more note: many historic houses in America had windows (and exterior shutters) that were painted dark. Black and green were the two most common colors in the 19th century. Painting your window sash a dark color will enhance the look of almost any historic house, while painting them white tends to detract from the look.  Here's a window on my 1831 Greek Revival, below. The sash and shutters are painted Black Forest Green. Note the straw yellow body and the white trim. 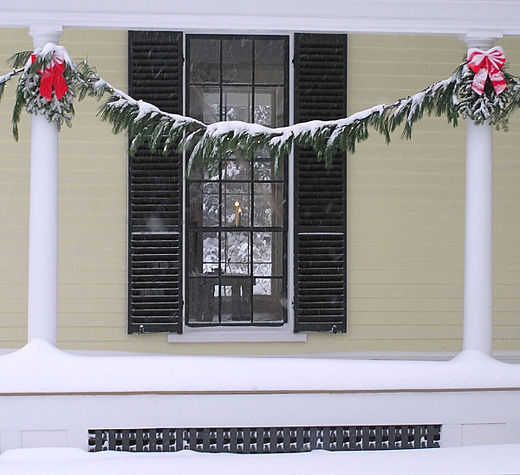 Not sure where to turn? We've been renovating and restoring historic houses, barns, and churches for almost twenty years. We'd be glad to point you in the right direction, so give us a call or drop us a line.